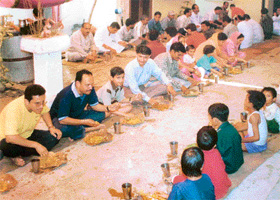 Those who eat together, stay together. Himachalis eating a community meal at a wedding. Â— Photo by Rajiv Sharma.

From the snow-smooched mountains of Himachal to the sun-kissed plains of Amritsar, it has been a long journey for Himachalis here. It was the search for the greener pastures that compelled many of them to leave the beautiful mountains of Kangra, Dalhousie, Chamba and Hamirpur and settle down in the holy city. It is believed that the first batch of the Himachalis arrived in Amritsar and adjoining Lahore (now capital of West Punjab) in 1904. The year 2004 is the year of the centenary celebrations of their settling down here.Though residents of the Kangra Colony, on Amritsar-Batala road, may be missing the fresh whiff of tea gardens of the picturesque Kangra valley, the scenic Dhauladhar mountains, the tingling aroma of pine forests, yet they do not seem to regret their decision to relocate here.

These Himachalis have done exceptionally well for themselves. When they came to the city, most of them were financially not-so-sound. But nowadays, more than 70 per cent palatial houses in the colony are owned by the Himachalis.Late Pt Brahm Dass of Hamirpur was the man behind the establishment of the Kangra Colony. No wonder, it is said that the people of the Kangra valley, who are renowned as hardy and courageous soldiers, have earned laurels wherever they have gone. They have brought the tranquility and the glory of the hill culture to the plains and added colour to the region.

Mr Kewal Krishan Sharma, President, Himachal Sudhar Sabha (HSS), is euphoric when he enlists achievements and contribution of the Himachalis. He claims that the number of Himachalis in Amritsar parliamentary constituency, which includes Batala, has crossed the figure of 2.50 lakh.

This includes about 90,000 voters in the Lok Sabha constituency.Mr Bhandari Lal Sharma, patron of the HSS, says the Amritsar North seat could not have been won by any party without the support of the Himachalis, who have at least 45,000 votes in this constituency. He says the Himachalis are well-settled now and they can field their candidate for the Lok Sabha and the assembly constituencies in the forthcoming elections. This may sound alarming for Akalis, who were instrumental in creating a separate Punjabi Suba with the single aim of remaining in power, say observers.

If Amritsar has earned fame for delicacies and its eating joints, the major contribution has been that of the Himachalis. Many shops of kulche-chhole, which have become a household name in other parts of the country, are owned by the Himachalis.Anant Ram Kulchianwala, a resident of Una, who arrived in Amritsar in 1915 and started selling kulche-chhole has established a string of shops, including those at the posh Lawrence Road and Chhatti Khuhi.These shops used to be visited by Dr Manmohan Singh (now Prime Minister). If the city gave prosperity to Anant Ram Kulchianwala, he, in turn, helped the Amritsari kulche-chhole and bund-chane to become a part of the Indian cuisine.

Not many know that Pt Udho Ram Sharma, father of the famous cricketer, Madanlal, hailed from Hamirpur district and came to Amritsar in 1928. He still runs a big halwai shop at the busy Lawrence Road. He says he is proud that his son was born here.Interestingly, most of the halwais, who have excelled in catering service, are from Himachal Pradesh. Those familiar with Amritsar must have relished the jalebis of Kattra Ahluwalia. The two brothers Dina Nath and Gurdas Ram who were in the age group of 11-13 years, started selling jalebis some 54 years ago. Beli Ram Munim of the Munim Sweets fame also hails from the mountainous state.

The family of late Krishan Chand Kalia, who started the Krishna Bakery, is from Himachal. Prem Nath Halwai, hailing from Hamirpur, is one of the most sought after halwais of Amritsar.Mr Bhandari Lal Sharma took this correspondent to a ramshackle dera (Gaza Nand) in the walled city, where newcomers” looking for greener pastures, take shelter. Mr Sharma, one of the sons of the famous Anant Ram Kulchianwala, who is now a big marble dealer and property dealer, takes pride in the fact that he was born and brought up at the dera. The family, now, owns property worth crores.In fact, children of many Himachalis, who had come to the city without many resources at their disposal, have grown up to be eminent doctors, engineers and owners of big factories. Mr Sharma said that a former principal of the local medical college hailed from Himachal Pradesh.

The Himachalis have monopolised the newspaper business as well. Mr Beli Ram, who started his career as newspaper hawker in 1946, has now employed 450 hawkers. Mr Vijay and Mr Pradeep, both sons of Mr Beli Ram, say that they have the sole agencies of various newspapers and magazines published from metropolitan cities, including Mumbai, New Delhi, Kolkata and Chennai.It goes to their credit that the Himachalis have not forgotten their roots. Some of them returned to their state after earning huge money, particularly when militancy was at its peak. Those permanently settled here still prefer to get their children married in Himachal Pradesh. Though they speak chaste Punjabi, yet they converse in Pahari when they are amongst themselves.Their rituals and culture can be seen during their marriages. The age-old folk songs can be heard at the time of ladies sangeet.

Bride and bridegrooms wear traditional outfits and ornaments on such auspicious occasions.The HSS, on its part, is not lagging behind in social work. The sabha has opened a few sewing centres, which provide free-of-cost training to needy women in Tandon Nagar and Indira Colony. The HSS also arranges marriages of daughters of widows and helps in providing free education to the needy.What is creditable, say observers, is that the Himachalis have been rated as the most peace-loving citizens and they hardly commit any crime, as crime statistics would bear it out.