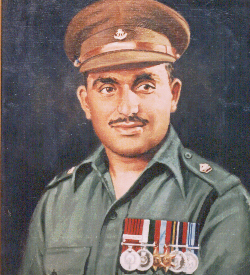 Major Som Nath Sharma was born on 31 January 1923 in Dadh, Kangara District in Himachal Pradesh. His father, Major-General Amar Nath Sharma, was also a military officer and his brother General V. N. Sharma was the Chief of Army Staff from 1988 to 1990. He was commissioned into the 4th Kumaon Regiment of the Indian Army (then British-Indian Army) on 22 February 1942. He also saw combat during the second World War in the Arakan Operations. His younger brother Gen. V. N. Sharma retired as head of Indian army.

On 3rd Nov 1947, Major Somnath Sharma’s company was ordered on a fighting patrol to Badgam village in the Kashmir Valley. He reached his objective at first light on 3rd November and took up a position south of Badgam at 1100 hours.

The enemy, estimated at 700, attacked his company position with 3-inch mortars, LMGs and rifles. Completely outnumbered and with withering fire being brought to bear on its position from three sides, the company began to sustain heavy casualties. 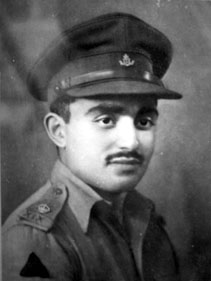 Fully realising the gravity of the situation and the direct threat that would result to both Srinagar and the aerodrome if the enemy attack was not held until reinforcements could be rushed to close the gap leading to Srinagar via Hum Hom, Major Sharma urged his company to fight the enemy tenaciously, with extreme bravery, kept rushing across the open ground to his sections exposing himself to heavy and accurate fire to urge them to hold on.

Keeping his nerve, he skilfully directed the fire of his section into the ever-advancing enemy. He repeatedly exposed himself to the full fury of enemy fire and laid out cloth air strips to guide our aircraft onto their targets in full view of the enemy.Sharma.jpg Realising that casualties had affected the effectiveness of his light automatics, this officer, whose left hand was in plaster, personally commenced filling magazines and issuing them to light machine gunners. A mortar shell landing right in the middle of the ammunition resulted in an explosion that killed him. However, Major Sharma’s company held onto its position and the remnants withdrew only when almost completely surrounded.

His inspiring example had resulted in the enemy being delayed for six hours, thus gaining time for our reinforcements to get into position at Hum Hom to stem the tide of the enemy advance. His leadership, gallantry and tenacious defence were such that his men were inspired to fight the enemy outnumbering them by seven to one for six hours, one hour which was after this gallant officer had been killed. Major Sharma set an example of courage and qualities seldom equalled in the history of the Indian Army. His last message to Brigade HQ received a few moments before he was killed was : “The enemy are only 50 yards from us. We are heavily outnumbered. We are under devastating fire. I shall not withdraw an inch but will fight to the last man and the last round.”