New Delhi, June 16 (IANS) Lathi-charge, the familiar term for mob managment by police forces in India, is set to become history. Delhi Police will be doing away with its colonial-era bamboo lathis (staves) for a lighter and easier to wield plastic baton that will “hurt less” when it comes in contact with the human body.

Made of polycarbonate, a transparent, solid and virtually unbreakable material, the new batons are easy to hold and swing due to its lower weight and will also “hurt less”, a police officer told IANS.

The new batons are being progressively introduced. “As they are light in weight they tend to cause less damage to an individual and reduce the chances of grievous injuries,” the officer said on condition of anonymity.

Delhi Police had faced a lot of flak in June 2011 when a 51-year-old woman supporter of yoga guru Baba Ramdev died after she was hit by a police lathi at the Ramlila grounds. 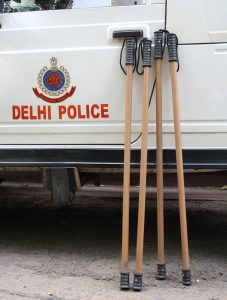 The deceased, Rajbala, who received serious spinal injuries, was one among the several supporters of Ramdev who were beaten up and forced to leave the premises in a police crackdown on a protest against corruption. Also, during the anti-rape protests in the capital last December, Delhi Police came under fire for indiscriminately using force on the demonstrators. The courts had pulled up the police for using force.

“Such incidents will now hopefully be prevented,” the officer said.

The new batons were first introduced in the Delhi Armed Police battalions and in some key areas in New Delhi that see many protest demonstrations. “They will soon be introduced in all police stations of the city,” another police officer told IANS. Delhi has 180 police stations.

According to Deputy Commissioner of Police S.B.S. Tyagi, the new batons will mostly be used to control restive and unruly crowds.

“The area around Jantar Mantar and Parliament Street is usually where demonstrations are held. Sometimes they get out of hand and we are forced to resort to a baton charge,” Tyagi added.

“We have introduced these new versions in a few of our police stations,” he said.

Another officer said that police in most of the European countries have started using such batons. “This upgradation is a commendable step,” the officer added.

The new batons will be easier to carry and hold for police personnel as well since they are required to stand for hours sometimes under the hot sun at 45 degrees Celsius.

“These batons are available in different sizes, diameter and length and are made to order for police and paramilitary forces,” a manufacturer told IANS.

“The normal size of these batons is between 30 and 40 inches,” an officer said.