If even half of what Frances Harrison has uncovered about what the Sri Lankan state did to crush the Tamil Tigers is true, then Colombo’s political and military leadership can be in the dock for war crimes.

The former BBC journalist talks to a few who got trapped in the LTTE war zone until the Tigers were vanquished and later made their way to the West — with revolting stories of death, destruction, savagery, torture, rape and humiliation of an entire community heaped in the name of a war on terror. 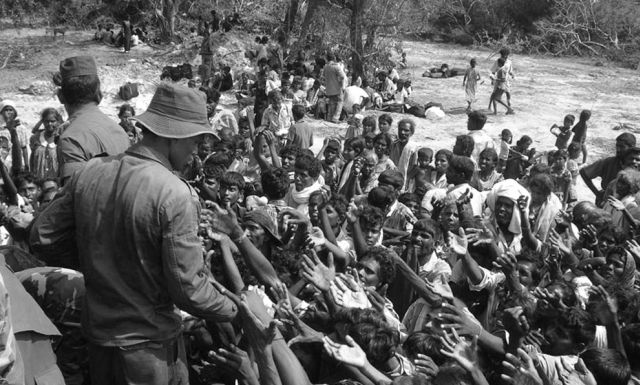 “Tens of thousands of civilians were slaughtered by the Sri Lankan government,” a UN aid worker tells Frances, who painstakingly tracks witnesses to know what happened during the end stages of the war until May 2009 and, in some cases, beyond.

With international organisations abandoning over 400,000 Tamils they should have protected, there was no place to run as the military went on the kill, not bothering to differentiate between LTTE fighters and civilians. One UN official concluded that the government repeatedly declared safe zones “only to concentrate civilians in one place so as to kill as many as possible”.

This, of course, was not the official line. To the world, Sri Lankan leaders kept parroting that they had a “zero civilian casualty policy”. Frances says the UN and many Western diplomats in Colombo knew this was a lie “but remained silent”.

Nobody knows for sure how many LTTE fighters and civilians perished in the military blitzkrieg that began in 2008 and reached its peak the next year. Sri Lanka adopted “scorched-earth tactics, blurring the distinction between civilians and combatants, and enforcing a media blackout”. The world turned a blind eye, and countries from India to China backed Sri Lanka. Everyone was ready to accept Colombo’s denials at face value. You get the bone-chilling truth from Frances.

Frances meets scarred survivors who recount how they walked to surrender to the army, “their bare feet stained with human blood” and seeing “still burning, and limbless, decomposing corpses … under vehicles or alongside bunkers”. A priest remembers counting “thousands of dead on that journey, most of them civilians, not fighters”. A Sinhalese soldier jeered: “We have killed all your leaders and you are our slaves!”

A journalist who worked for the pro-LTTE web site TamilNet describes seeing “children’s brains exposed by shattered skulls” and hearing “desolate screams of their mother”.

A doctor who remained in the war zone saving thousands of lives with a group of medics recalls that after January 2009, “people would arrive (in barely functional hospitals) with all the flesh blown off their limbs, the white bones visible like chewed joints of raw human meat”. If doctors shared details of their hospital’s location with the army, “the buildings were attacked (by artillery and air) within days, if not hours”.

The doctor says the military used white phosphorous. By the end of the war, hospitals had no medicines, no bandages. Surgeries were conducted using knives. After having seen thousands of limbs and body parts, the surgeon today “cannot stand the sight of blood”.

Each recall of the war’s end stages – by a nun, a teacher, a volunteer, a LTTE fighter, a shopkeeper and a wife – is more horrific than the previous one. It is difficult to even imagine that civilians in no way responsible for what the LTTE did were subjected to such savagery by a state whose citizens they were. The account by a distraught woman married to a pro-LTTE man brings out shocking details of how Tamil women were raped at will.

Frances holds no brief for the LTTE. She denounces it for forcing Tamil civilians to forcibly live in rebel territory. “Tamil nationalist groups conveniently overlook the fact that the Tiger leaders deliberately exposed their own people to slaughter and refused to surrender…”

Sri Lanka’s tragedy is not over. “Human rights activists and journalists have continued to disappear well after the war ended – not only Tamils but Sinhalese too.” The book is a good guide to understand why the Tigers went down – after having been seemingly invincible for decades.

The book is also a powerful indictment of Colombo – and the LTTE. It should be read by anyone wanting to know what happened in Sri Lanka.

(Review by M.R. Narayan Swamy, a senior journalist and the author of three books on Sri Lanka.)