Shimla: Stalemate over the India-China border settlement persists, much like it did so almost a hundred years ago when British rulers were drawing up the McMohan line, but now Himachal tourism intends to draw up the historical context of the 9 month long 1913-14 tripartite Shimla Convention, especially given its present significance.

Occupying some office space at the historic United Service Club (popularly known as US Club) where much of the rough drafts marking the international border nearly a hundred years ago were drawn up, director tourism Arun Sharma says, we are dwelling upon bringing out this aspect of Shimla’s date with history in the “Har Ghar Kuch Kehta Hai” theme based museum housed in this very building.

Under a heritage project funded by Asian Development Bank, some portion of the building has been restored but most of it is still occupied by government offices who have desecrated much of its exquisite interiors by using cardboard partitions for making pigeon hole rooms and applying layers of paint to give the seasoned oak and cedar wood an ugly look.

After having gone through the pictorial history of an imperial Simla (as it used to called then) tourist Leon-e-Wina White, a Beijing resident, leaves behind a note in the visitors book saying, â€œinteresting to learn about the colourful history of Simla, particularly the sad events of the partition and too see where the one once famous McMohan line was drawn. 

Everyone has their own interests in a particular event,  mentions Leon-e-Wina White , mine lies with the role of Simla in the border dispute with China. 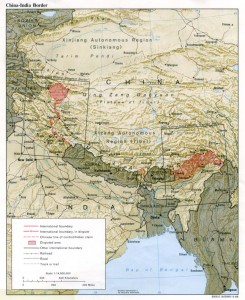 The 1913-14 Shimla Convention was held in the aftermath of a military expedition of Lhasa in 1905, ordered by British czar Lord Curzon with Francis Younghusband in command.

The adventure was followed by Chinese military successes in eastern Tibet leading to a India, China and Tibet border dispute in high Himalayan lands.

With the view of settling the Tibetan question, British India’s foreign office on May 23, 1913 invited the Chinese government for a joint conference, which would include a representative from Tibetan government, to arrive at a tripartite agreement.

The 1862 Shimla born AH McMahon British India Foreign secretary with many years of his career devoted to boundary work was made the chairman of the conference.

The Tibetan delegate appointed to represent the Dalai Lama was Lama Lonchen Shatra, someone who had seldom left his native land but surprised the British and Chinese delegates about his knowledge of men and grasp of political affairs.

China was represented by Ivan Chen, a widely travelled diplomat who spoke English well and had served for nine years in the Chinese Legation in London as counselor.

Though Chen headed the delegation, but the power behind the scene was one Lu Hsing Chi, who was considered an expert on Indian and Tibetan affairs.

The convention opening session was held on October 13, 1913 at Dharbhanga Palace house with Lama Lonchen laying his claims on the table, stressing recent Chinese excesses and asserting Tibet’s independence.

Ivan Chen counterclaimed China’s sovereignty over Tibet with the right to station a resident (Amban) in Lhasa garrisoned with 2600 men.

In November 1913, McMohan made a 1906 map Tibet and the Surrounding Regions  published by Royal Geographic Society as the basis of the ongoing discussion.

Snow disrupted the discussions and the conference was adjourned on December 24, 1913. Lonchen Shatra went on a pilgrimage to a Buddhist shrine and Ivan Chen made a motor car tour of Agra and other cities.

With the conference re-convening on January 12, 1914 McMohan on February 17, 1914 McMohan presented a map supporting a buffer state idea by the two-zone proposal as a solution of the political issue by the recognition of autonomy for Outer Tibet, whilst reserving to China the right to re-establish such a measure of control in Inner Tibet as would restore and safeguard her historic position, without in any way infringing the integrity of Tibet as geographical and political entity.

While Ivan Chen and Lonchen Shatra argued the pros and cons of McMohan proposals into spring and summer, Chinese and Tibetan troops fought one another on the eastern-Tibet border.

Not being able to settle the vexed border and frustration creeping in on July 3, 1914 Chen informed the conference that Peking’s very explicit instructions enjoined him not to sign the Tripartite Convention.

Lonchen then reported his instructions. Lhasa had said that as he had accepted the Convention, he should sign it. 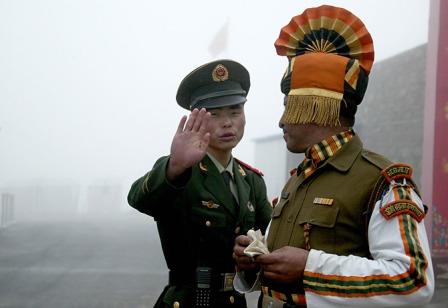 As soon McMohan and Lonchen Shatra had signed the document, McMohan closed the conference after a tripartite negotiations had been held for nine months but only two nations got to sign it.

After Britain and Tibet signed the border agreement, Ivan Chen declared that his government had instructed him to announce that they  would not recognize any treaty or similar document that might now or hereafter be signed between Great Britain and Tibet. 

McMahon returned to England immediately after the conference ended.

By far the most far reaching result achieved at Simla was the delimitation of 850 miles of boundary between India and Tibet.

McMohan was able to put the finishing touches to his famous red line on the map after hearing the results of an extensive survey carried out by Bailey and Morshead.

A summer capital for British India, several important conferences were held in Shimla including this convention and the more famous one, which was held in 1945 and decided the fate of the sub-continent by dividing India and Pakistan.

Even after Independence, following the 1971 war, the city played host to the India-Pakistan Shimla Summit in 1972 that still holds.